Eliminating causes of high CPU usage in your network 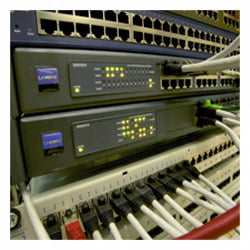 Check your configurations for causes of high CPU usage

Performance degradation can have many causes, and the more complex your network, the greater the challenge in identifying reasons for bottlenecks and high CPU usage in routers and switches. It might be that configurations placed on devices with the best of intentions are the actual cause of performance issues. Take collisions for example: when a certain switch is configured at full-duplex and another at half-duplex, collisions are commonly the result. This simple misconfiguration, if not detected and rectified, can lead to latency and dropped packets, causing staff to experience slow response times from resources such as networked applications, file access and so on.

Reviewing your documented changes on your devices and performing regular testing could very well bring configuration issues such as these to light. Other causes might be incorrect compression configuration on routers, packet fragmentation and port overutilization.

What traffic is passing through the network?

Moving away from router configurations, other causes of performance issues such as large, unscheduled server updates, massive backups running during business hours, and illegal downloads of content via peer-to-peer applications will certainly add unnecessary strain on your networking devices. Look at how updates and backup time windows are configured and make the necessary changes where needed.

It may be that a predecessor’s implementations are no longer suitable to the network. So, it is important to review the network’s configuration and reference documented procedures around how the environment has been set up. In addition, enforce new policies that stamp out the downloading of illegal content from the organisation’s network if they were not in place before. These can cause major performance issues and pose serious legal ramifications for your business.

Ironically, many network monitoring systems play a contributing factor in high CPU usage problems for IT staff. Certain monitoring solutions simply overburden networking devices with excessive querying and place unnecessary demands on it. When this occurs, further network issues will arise. Well-designed monitoring systems take into account the importance of placing the least amount of processing on networking nodes whilst collecting pertinent metrics at the same time.

What sets IRIS apart from other network monitoring systems is that our software collects data in the most unobtrusive way possible. Our lightweight polling method means that we remove the processing burden from the networking device after collection of key metrics. IRIS doesn’t expect busy routing and switching devices to process additional networking data, but performs this function on our custom-built servers, thus removing any additional loads from your networking devices.

In addition, our software is designed to be self-healing, which eliminates the need for engineers to troubleshoot the system if minor issues may occur. IRIS is capable of self-correcting in most instances and continue to provide your team with the information they need to keep your network running at peak